Henrik Stenson #1 in the World?

Ok, he may not be "literally" #1 but who can argue that he isn't playing the best golf on the planet right now?! How long before he IS #1? As a mental game coach I've watched a man resurrect himself from the depths of the game to the heights in a relatively short period of time. His mental toughness equals his incredible ball striking, in my opinion.

I'm sure that the time Henrik spent down in the depths felt a lot longer to him but he was nowhere in site just a mere two years ago and now he is completely dominating events he enters. And we're talking the BIG events.

Imagine winning the Fedex cup, a cool 10 million plus the winners check of 1 mil+, and then head overseas and win the Race to Dubai and add another 5 million or so to his coffers. 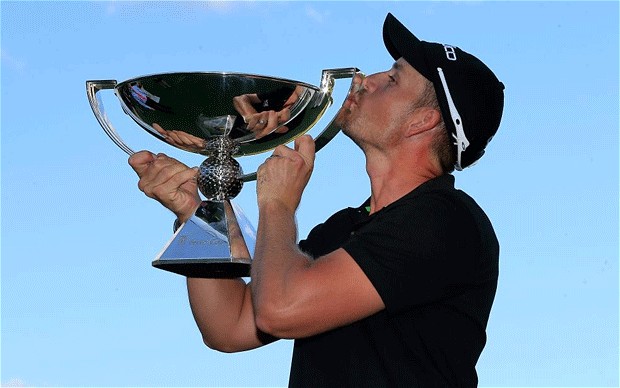 Luke Donald and Rory McIlroy both one the money titles in US and Europe in a single year. That is impressive to say the least. But to go and win BOTH the Fedex and Race to Dubai is almost ridiculous in terms of consistency at the highest possible level.

Will he win a major? This is always the question the pundits and bookmakers such as bwin.com/en/golf ask, as if it is the only true measuring stick of golfing greatness. Well, you better believe he will. His ball striking and mental awareness of his game are no accident.

Certainly there has to be at least a little dip in his performance after such a monumental year as 2013 was but once the majors start rolling into the calendar you'd better at least consider Henrik Stenson when placing a wager. Can't really know the odds just yet but you won't be the only one making a wager that's for certain.