The long putters anchored putter rule is being implemented in golf. It will be phased in but the rule states that you can not "anchor" the putter to any part of your body.

This will affect a lot of players! Not to mention the average player who take sup the game or has been using long putters anchored putters to play the game they love. I wonder what the majority of players think and feel about this hot topic. 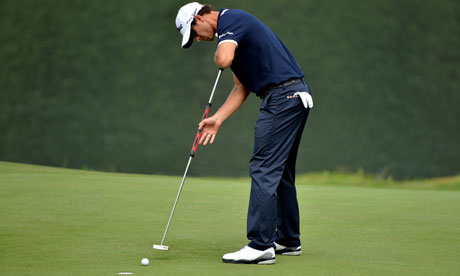 I'm sure this issue won't go quietly. Imagine if you'd been using it for years as a professional and now you have to go through such a drastic change? Well, I for one do have an opinion, which is all it really is, on the benefits (if there is) of using a long putter anchored putter.

I do feel that it does minimize the direct affect of nerves on the putting stroke. Holding a standard length putter with two hands beside each other reveals choking far more that long putters do. After all, why did Ernie Els make the change and then win by doing it?

Lastly, what about using long putters as measuring tools for dropping after going in a hazard? The length gives a clear advantage. Even the longest driver can't compete with the long putter length, on average. Perhaps this could have been looked at and dealt with relatively easily.